On Being a Social Developer: Observations from That Conference

I've been thinking quite a bit about being a social developer, particularly because I talked to Richard Campbell and Carl Franklin about it recently on .NET Rocks! (look for the show to be published next week). Because of this, I was a bit hyper-sensitive to the topic when I was at That Conference 2015 a few weeks back.

Loners at Mealtimes
Previously I talked about how mealtimes always seemed to be the most stressful to me. I didn't want to sit by myself, and I wasn't confident enough to easily go up and join someone else. I've managed to get past that from 5 years of introducing myself and sitting down with strangers. It was terrifying the first few times, and I'd be lying to say I'm entirely comfortable with it now -- but it is a lot easier than it used to be.

I'll go back to my observation that developers like to talk, but they don't like to start the conversation.

I took a couple of pictures at breakfast at That Conference. I was there fairly early, but there were a lot of people already in the room. Here's the scene looking toward the front of the room: 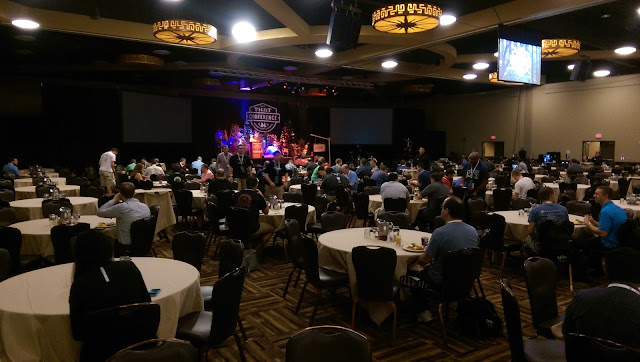 And toward the back: 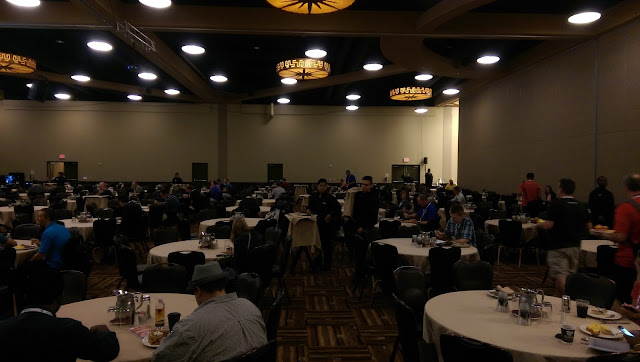 I did some rough counts of how many tables had just 1 person and how many tables had more than 1 person. This is pretty rough because you can't see all of the tables (you can see most of them, though -- note the man in the blue shirt on the right hand side of the top picture is on the left of the bottom picture).

Tables don't stay empty for long. Here's a picture of the full room doing the "power stance" (just before the opening keynote): 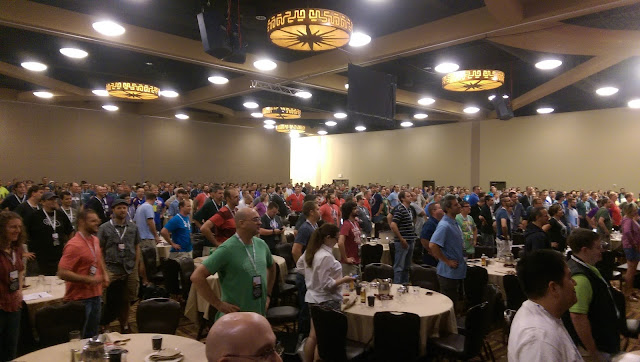 Resolution: Never Sit Alone
I'm resolved to never sit alone at a conference. I used to think that if someone was sitting by themselves that they wanted to be left alone. But what I've found is that most people are welcoming and open to meeting someone new, but they are reluctant to initiate the process themselves. It is scary, it does make you vulnerable, so I fully understand this.

Great Conversations
I've made some really great contacts this way. At the first breakfast, I ran into someone I knew in the food line (Mike Clement) and we went and sat with someone new who turned out to be John Strobel. John works for Progressive Insurance and lives in Ohio.

I hadn't seen Mike for several months (he's a fellow speaker who I seem to run into quite a bit). I found out that Mike recently moved to Atlanta, GA to work with a developer boot camp. This got the conversation rolling since this is a topic that intrigues me. I mentioned how I had met Sarah Dutkiewicz at the Microsoft MVP Summit, and we talked about the boot camp in Ohio that she was involved with (The Software Guild).

It turns out that John was familiar with The Software Guild (and Sarah, who everyone knows as @sadukie). And we had a great conversation about what makes for a successful boot camp, what qualities companies are looking for in the graduates, and how we can nurture more developers who are just starting out.

And all of this started by sitting down with someone I didn't know.

Picking a Table
Picking a table to sit at can still be a challenge. In the past, I've chosen tables with a group of folks all from the same company. This can turn out to be good or bad. If they're talking about work, then the conversation is usually not that good for me. But at That Conference, I ended up at tables with 3 or 4 people from the same company, and we had good conversations about tools and languages.

I've talked about the table picking dilemma with several people. I recently got a good piece of advice (sorry I can't remember who it was from (it may have been Jeff Fritz (aka @csharpfritz)) -- I've been talking to a lot of people). When deciding where to sit, he looks for a table with 2 people who are not sitting next to each other. Then he goes up and sits opposite them to form an equilateral triangle at the table.

The idea is that this gives you a better chance at conversation. The people (who may or may not be talking) probably don't already know each other, so you minimize the risk of work talk. And if one person doesn't want to talk, then you're not stuck in silence; there's someone else to talk to.

And people are attracted to active conversations (as mentioned in the previous article). So more people will come up and join you at your table. And things grow from there.

Conversations Get Longer
One interesting thing is that I'm never sure which conversations will turn into something bigger. As I mentioned when I talked about last year's Microsoft MVP Summit, I often keep running into the same people over and over again. And this is a pleasant surprise.

Another example is David Neal (from Georgia) who I ran into several times. My first encounter with him was at a get together on Monday night. Later, I went to his presentation on Node.js which had this gem that I mentioned in a previous post:

(BTW, I'm totally stealing this phrase to use as often as possible).

Then on Wednesday, I ran into him while I was on the hallway track. John, David, and I had a great conversation about effective presentation techniques, and David showed us his hand-drawn slides that he uses for his presentations. Really cool stuff.

Continuing Relationships
I also had the chance to continue some relationships. I first talked to Ondrej Balas (from Michigan) at Nebraska.Code() in Lincoln NE earlier this year. I saw him on the speaker list for That Conference, so I kept an eye out for him.

We talked for a little while at the water slide party on Tuesday night (and Water Slides are totally better than Powerpoint Slides). We found that we were both on the same path for building our brands as developers. He shared some things that were working for him (such as video blogging -- and he has a really cool idea for an ongoing series (I won't spoil it)), and I shared some things that I've seen. We decided that it would make for a good Open Spaces discussion and decided to put in on the board for the next day. If nothing else, the two of us could sit down to continue our conversation.

Our Open Spaces slot was during lunchtime on Wednesday, so I went to grab some food and head to the circle. In the lunch line, I met Phil Busch from Milwaukee. I told him about the conversation that Ondrej and I were planning, and he decided to join us. There were about 6 of us who joined the circle, and we had some great tips and observations for each other.

Old Friends and New Friends
I knew a few of the speakers from previous events, and it was great to talk to Cory House, Brian Lagunas, Bill Wagner, James Bender, Jim Wooley, and Danny Warren. And it was by hanging out with some of these people that I got to meet Nik Molnar, Keith Elder, Shane Charles, and many other folks.

I feel bad because I'm listing lots of people that I talked to, but there were many, many more. I try to talk to the person sitting near me in the sessions (before they start), and this results in many short conversations with new people.

Among the registration line, evening get-togethers, meal lines, meal tables, hallways, and pre-session times, I must have talked to 40 or 50 people. Some conversations are more memorable than others. But because of these conversations, I spent time looking into IoT devices, JavaScript debugging, Node.js, Erlang, and several other technologies/techniques that I haven't spent time on previously. And this makes my world (both technical and social) just a little bit bigger.

Why Attend Developer Events?
And this all comes back to why we attend developer events in person, whether it's a local user group or a large conference. We can get all of the information presented in the sessions on-line. But the real benefit of being there in person is the interaction with other developers.

I really feel like I missed out on a big part of conferences when I was a young developer. I did learn a lot from the presentations, but I completely missed out on building on the experience of the developers around me.

By making these connections, we learn about technologies we don't currently use. We learn how different techniques work in different environments (from start-up to corporate development). We can share our frustrations and look for solutions together.

I never saw myself as a social person. And I am completely different in this regard than I was 5 years ago. I'm pretty amazed to look back and see the difference in how I interact with developers now compared to how I used to interact (or not interact) with them.

Take the first step: the next time you're at a developer event, introduce yourself to someone new. It could be the start of something really amazing.