When it was time for a new phone a few months back, I went with Android: Goodbye HTC, Hello HTC. And I've been very happy with that phone. Performance is great, 4G LTE works well in the places I've used it, and tethering works well -- I've found that I prefer to tether in a lot of places rather than use the public WiFi. Google Now is a little bit creepy (how does it know what TV shows I might want to watch right now?), but I'm starting to get over that.

I also mentioned why I did not choose Windows Phone. But I had a chance to get a decent device really cheap, so I decided to pick up a phone for development purposes. 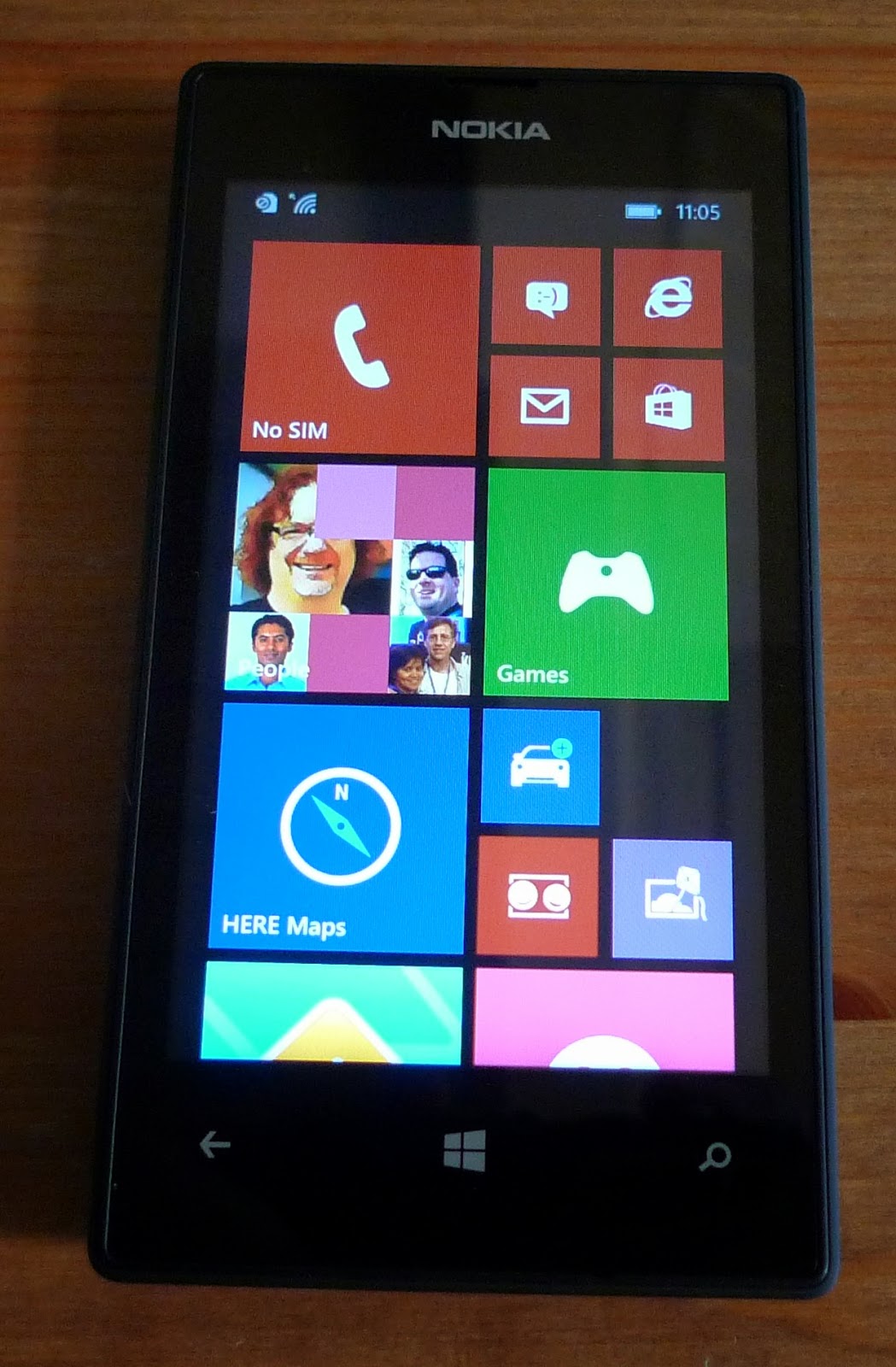 First Impressions
I managed to get it on sale for $40. That was very hard to pass up for a new phone running Windows Phone 8.1. (Well it was advertised as Windows Phone 8.1, but it came with 8.0 installed. It was easy enough to get 8.1 on it through software update, but I would not have liked to wait if I was using this as my primary device.)

I didn't activate the phone (it's actually a GoPhone on AT&T). I hooked it up to WiFi at home and also set it up to tether with my HTC One. Both of those have worked great so far. It was interesting to get what looked like an SMS (under the generic heading "Messages") inviting me to check out features of Windows Phone even though I don't even have a phone number. But I guess that's something you can do when you wrote the operating system.

Out of curiosity, I set up the apps that I use quite a bit on my phone: email, calendar, contacts, Skype, and Twitter (to get started with). I found that I could add my Google account -- which is good. This brought in my Google contacts, set up a calendar, and also configured email. What's missing, though, is the specialization that Android apps offer for Google -- a big one that I miss (which I didn't think I would) is the tabbed Inbox. This did enforce that I made the right decision on my primary phone since I'm invested in the Google ecosystem at this point. (And I still don't have a good way to use Google Voice.)

Other than that, it's really hard to complain about a $40 device.

Windows Phone Development
I was wondering how difficult it would be to get the phone working with Visual Studio. It turns out it was pretty easy.
That's wasn't very difficult. The thing that I liked about the process is that there were clear instructions on what to do if the deployment didn't work. I did not have to spend any time searching the internet for help.

Will I become a Windows Phone developer? I'm not quite sure at this point. But I'm more likely to play around with some stuff now that I have a device.

Leveling Up: The Professional Coder Workshop

Nuri Halperin, Hattan Shobokshi, and I have been working hard to put together an amazing day filled with practical advice from real developers for real developers. If you're a developer who's interested in honing your skillset, be sure to check it out.

Leveling Up: The Professional Coder Workshop


How can you create better software? What cutting edge practices can you employ to become a better professional?

You already know how to code. Now it's time to hone your software development skills to take you to the next level. Learn how to use cutting edge coding techniques that make your software better: Easier to understand, easier to collaborate on, easier to change, and easier to verify.

This workshop is a packed day of training and labs, and it's an awesome opportunity to learn essential skills we as software developers need.

Space is limited, so be sure to sign up early to reserve your spot: Leveling Up: The Professional Coder Workshop.

Also be sure to join the Dev Sharpener group on Meetup. We've got more events in the works, and you don't want to miss out.

Happy Coding!
Posted by Jeremy at 9:41 AM No comments: