I recently looked back at the impact that Linda Rising has had on my career and life, and I wanted to express my gratitude for that.

I first heard Linda on the Hanselminutes podcast back in 2013: The Agile Mindset with Linda Rising. Listening to her describe the agile mindset compared to the fixed mindset really opened my eyes. I immediately watched a recorded keynote called "The Power of the Agile Mindset" (the link I had to that is sadly no longer working).

This clarified some of my observations and led to quite a bit of self-reflection. (Here's the long version if you're interested: Fixed vs. Agile Mindset.)

Initial Realizations about Others
When I heard this concept, certain things immediately started to make sense. For example, there was a development team where the managers refused to invest in the developers. Instead, they were constantly looking for the process or tool that would make the team successful. This always frustrated me to watch, but I realized that the management had a fixed mindset toward their team: "Our developers are as good as they are going to be, so we need to look for solutions elsewhere."

I've always had the opposite opinion about developers. And fortunately the team that I joined when I was a brand new developer believed that as well. With the agile mindset, there wasn't anything that we couldn't learn. We were constantly building each other up and making each other better. I know that my situation was fairly unique, but I really wish that all junior developers could have such a productive environment.

And since I'm a speaker, coach, educator, Developer Betterer, I obviously have this mindset toward the developers that I'm teaching. And I don't think of it as teaching most of the time, I think of it as helping people past the hurdles that I had trouble with when I was learning a particular topic.

Initial Realizations about Myself
The real eye-opening moment, though, was when I started to reflect on myself. I found that I had the agile mindset in some areas and the fixed mindset in others. For example, when it came to technology, I was pretty confident that I could learn whatever I put my mind to. But that wasn't true of all areas of my life.

When it came to things like music, I thought of myself as "not a musical person". On reflection, I came to realize that I had never put any real effort into it.

I had a few more realizations that you can read about in my original article: Fixed Mindset vs. Agile Mindset.

Changing My World
I decided to get over my hurdle with music. So, I bought a banjo in January 2015. And I set about to learn to play it. And I made progress.

But more importantly, I was able to use the banjo as an object lesson for others. 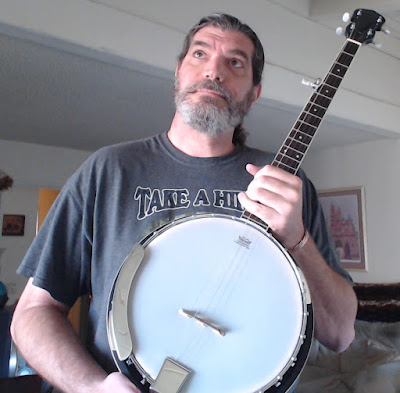 Learning Something New
First, I did something I never would have done before: I played a musical instrument badly in front of other people. There was a time in my life when I would never think about playing for others unless I knew the piece perfectly. But now I'm okay with showing that I'm not an expert and that learning takes time: You Aren't Instantly Awesome, and That's Okay.

This has been a great way to talk about learning in our industry. As developers, we're constantly having to learn new things. And it's really easy to feel inadequate when there are so many people who already know this new thing. But we all have to start somewhere, and everyone has to go through that same learning process.

Getting Better
The good news is that I tracked my progress with the banjo. And I did see actual progress: You Aren't Instantly Awesome, But You Can Get Better with Practice.

What this proved to me is that I am a musical person. And I can get better when I put the effort into it.

Getting Help
Another thing I learned is that once I dropped the fear of being imperfect, I was no longer afraid of asking for help from the experts. Again, specifically with the banjo, I was able to get help from a former professional player and from a professional music instructor. (Read more about that here: Don't Be Afraid to Show What You Don't Know.)

In the technical world, I've never been afraid to ask for help. But by going through this experience, it reinforced the idea that there's nothing to be ashamed of when you don't know something. I like to try to figure things out on my own, but I have no trouble asking for help when I get stuck. And this has led to some great learning experiences (particularly from the functional programming community which is so willing to help out).

Unfortunately, our industry has a general fear of showing weakness. I'm trying to promote the fact that no one knows everything, we all have our strengths and weaknesses, and we all have to start somewhere. I would love to see that fear disappear.

Giving Help
The extension of this is that I'm not afraid of giving help when asked. I don't think that I've ever really had this problem personally, but there are some known problems with this in our industry.

Thank You, Linda
I can trace a lot of this back to hearing Linda Rising talk about the ability that we all have to learn and improve when we put effort into it.

Thank you, Linda, for opening my eyes to a topic that I've been able to use to better myself and better those around me. I knew that this had an impact on me, but looking back, I see just how much of an impact it has had. Over the course of 3-1/2 years, the idea of learning and getting better at whatever I put my mind and energy into has given me opportunities and helped me make the world a better place.
Posted by Jeremy at 11:21 AM