I've been working some more on my code that recognizes hand-written digits. I've actually been trying out a few different approaches to try to improve the machine learning algorithm. But before talking about those, we'll take a look at a few improvements that I've made to the UI.

Note: Articles in this series are collected under the "Machine Learning (sort of)" heading here: Jeremy Explores Functional Programming.

New Features
I added a couple of features to the application. Here's a screenshot: 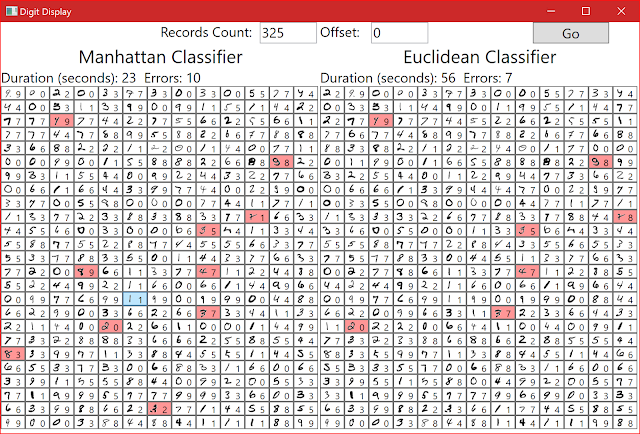 Record Count
There's now an input field for the number of records to process. Previously, this was a value in the code. This makes it much easier to pick new values based on the screen size.

(Note: I just noticed the typo in the header. D'oh.)

Offset
Previously, we were only able to use records from the beginning of our data set. This offset allows us to start at an arbitrary location in our data file (we'll see why this is important in just a bit).

"Go" Button
Instead of processing things when the application starts up, we now have a button to kick things off. This also means that we can change the parameters and re-run the process without needing to restart the application.

Separate Duration
Each classifier now has it's own duration timer. (The previous version just had a single timer for the entire process.)

Error Counts
This is actually the same as our previous version. But I wanted to point out that we can go through and click on the incorrect items. This changes the color of the item and increments our error count. This makes it easy to compare our two different recognizers.

This is still a manual process. We need a human to make a determination on whether the computer was correct. If I can't make out the hand-written digit, then I do not count it as an error.

Different Offsets
I wanted to have the offset available because I knew that if you keep trying to improve a recognizer against a small dataset, eventually you get really good at that small set. But that doesn't necessarily translate into being a good general-purpose recognizer.

I had done some experimentation by changing the offset in code. But having the parameter available makes things much easier. Here's an example of how different data makes a big difference: 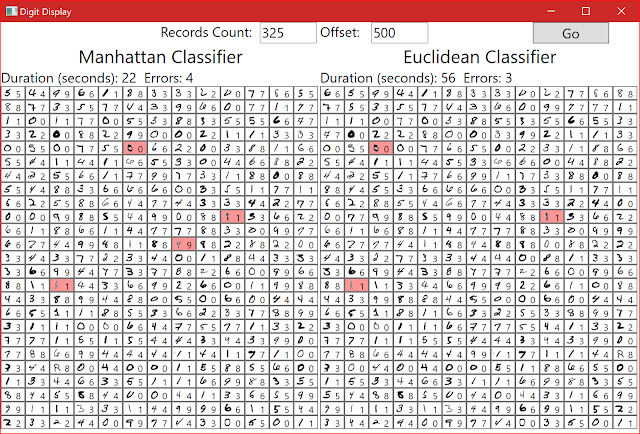 This is why it's important for us to look at different sets of data. When we start changing things, it may get better in some areas but worse in others.

Code Updates
I made a bit of a significant change in the UI: I created a user control to run the recognizer and process the data. This moved a bunch of code out of the main form, and it also reduced quite a bit of the duplication.

The application displays 2 of the user controls side-by-side, but we could display 3 or more (as many as we'd like, really). The user control makes that really easy.

Here's the code behind the "Go" button: 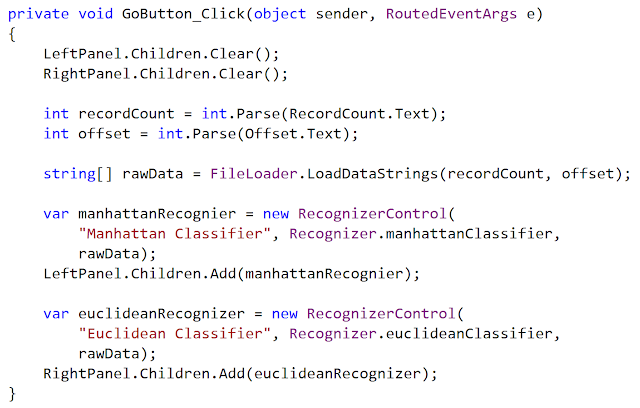 In our UI, we have 2 panels: LeftPanel and RightPanel. We start by clearing these out.

Then we grab the data. Since we have the parameters in the UI, I figured it was best to get the data in this central location (and only do it one time), and then we can pass the data to each of our user controls. The "LoadDataStrings" method grabs the data from the file based on our parameters.

Then we create 2 "RecognizerControl" objects (this is our user control). This has three parameters: (1) the string for the header, (2) the classifier (our recognizer), and (3) the data that will be processed.

We just create a user control for each of our recognizers and then add them to the panels in the UI. I'll be tweaking this part a bit in the future, but this works for us for now.

Wrap Up
These changes aren't real exciting. But they do put us in a place that makes it very easy for us to swap out different recognizers. I originally wanted to add some drop-downs so that we could pick different recognizers, but I wanted to prioritize some other things before tweaking the UI further. That may get added in the future.

I've been playing with a couple of ideas to improve the recognizers. These have been inspired by some of the F# reading that I've been doing as well as some ideas of my own. We'll take a look at those next time.

[Update 08/15/2016: Here's the experimentation with those ideas: Getting Worse Before Getting Better.]