A little while back, we saw how we could implement interfaces explicitly in Visual Studio (Explicit Interface Implementation).  We saw how Visual Studio helps us implement an interface.  Consider the following interface:

After creating a class (called "Implementation") that declares that it implements this interface, put the cursor in "ISaveable".  Then we see that we get the clue (with the small blue box under the "I") that Visual Studio wants to help us.  If we press Control and the dot (Ctrl+.), then we get a popup to help us.

Now if we go back to our "Implementation" class, we will see that the option to "Implement Interface" is back (for both the right-click and "Ctrl+." options).  If we select this option, then it will add any interface members that aren't already implemented.  In this case, it will add the Save method that takes the object parameter.

If we're still in the development cycle, then we will most likely go through many different iterations of the interface.  That's to be expected.  But we need to be confident that the interface is complete when we release it for use by other developers.

Another Option - Combining Interfaces
But we have another option.  Rather than changing the existing interface, we can create a new interface that inherits the original members.  In our sample interface, it would look something like this:

Now we have a new interface "IObjSaveable" that includes all of the members of "ISaveable", plus it's own members.  This means that any existing classes that implement ISaveable will continue to work as expected. For classes that need the extended functionality, they can implement IObjSaveable.  If we choose to "Implement Interface" on IObjSaveable, we get both save methods: 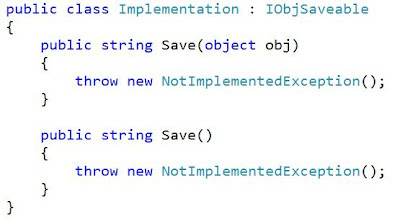 Contracts are Contracts
Interfaces are contracts.  To keep up our side of the contract (as the interface designer), we need to make sure that we are not changing the interface once we've released it for use.  But as we've seen, we can create new interfaces that include the members of other interfaces.  If you look at the Visual Studio help files, you will see that IList, ICollection, and IEnumerable do just that (ICollection includes IEnumerable and IList includes ICollection).  We can follow this same pattern to make sure that our code is well abstracted and extensible.