Let's take a look.  As we'll see, explicit implementation is generally optional; it all depends on what we are trying to do with the code.

Multiple Interfaces Using the Same Implementation
One reason people think we need to explicitly implement interfaces is if we have two interfaces with duplicate members (that is, one or more members that have the same method signature in each interface).  Let's consider the following interfaces: 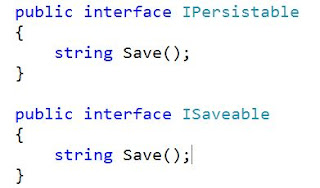 For this, we have 2 different interfaces that both contain the same method signature.  Your first reaction may be that if we have a single class that implements both interfaces, we need to implement them explicitly to avoid the name conflict.  But that is not necessarily the case.

Here is a sample implementation:

To see that everything is fine, let's put together a quick console app that shows the different ways that we can call the Save method: 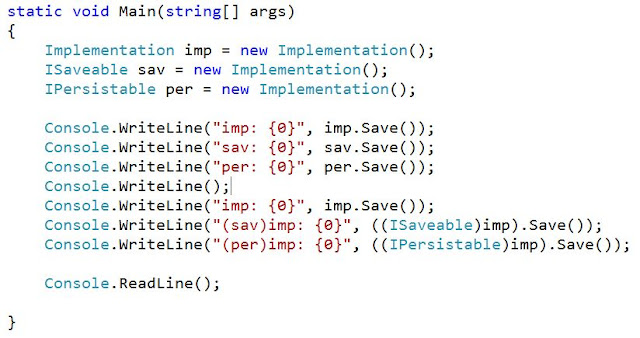 The first section creates 3 variables -- one each for the Implementation class, the ISaveable interface, and the IPersistable interface.  The first three WriteLine calls show the output of calling Save with each of these variables.

The last three WriteLine calls show what happens when we cast the Implementation class to the interface and then call Save.  Our output from this app is no real surprise:

Since we only have a single Save implementation, that is the output for each of the calls.  Again, if this meets our functional needs, then we do not need to explicitly implement the interfaces. 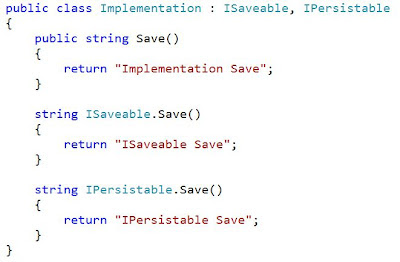 If you right-click on "ISaveable" and select "Explicitly Implement Interface", you will get the "string ISaveable.Save()" stub.  If we do the same for the IPersistable interface, we end up with three different implementations of the Save method.

Let's take a look at the output from our console app now (the code for the console app remains the same, only the Implementation class has been updated): 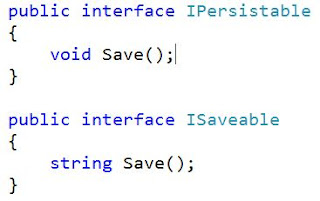 Here we have explicitly implemented the IPersistable Save method.  In this case, we are simply calling the main Save method (which has the ISaveable signature) because our functionality is the same for our simple example.

Interfaces are a powerful tool in the .NET developer's toolbox.  They allow us to add abstraction to our code, let our code be more extensible, and add seams to our code that can facilitate fakes and mocks for unit testing.  Explicit implementation is another aspect of interfaces that we can use when we have multiple interfaces with the same or similar members.