[Update: There's a huge, awesome update to this story, so be sure to scroll all the way down.]

I'm probably just getting philosophical in my old age, but how 'bout we, as speakers, change our terminology regarding whether we are selected to speak at an event:


No longer "Rejected"
Now "Not Selected"

This came up when my friend Jonathan Mills (@jonathanfmills) was dealing with the joys and sorrows of selecting sessions for KCDC (link: https://twitter.com/jonathanfmills/status/839957293550673920):

This got me thinking a bit, particularly since I wrote about the topic earlier this week: Rejection Gets Harder (Not Easier). What can we do to change our perceptions to make this process more productive?

Words Have Meaning
It seems like I've run into a number of different examples of how the words we use change the perception of the situation. A big example is the difference between "Sorry" and "Thank You".

When you keep someone waiting...

This changes the tone of the statement and injects gratitude into the relationship. The same thing is true when a speaker thinks about being "accepted" or "rejected" for an event. These words have meaning that may not really apply.

Let's look at an example, let's say that I decide to play Xbox. I've got a number of choices: 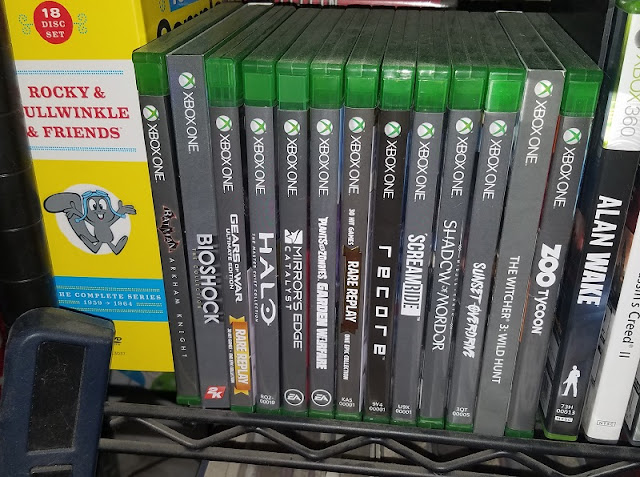 If I choose to play "Zoo Tycoon", I'm not rejecting "Batman Arkham Knight" or "The Witcher 3". I'm selecting the item that best matches my current needs (whether relaxation or catharsis), and I can only accommodate one selection. The other items just remain unselected. (Of course, I may decide to forego Xbox and watch "Rocky and Bullwinkle" instead.)

"Rejected" implies that someone made a conscious choice to exclude you from the selection process. This translates into "We don't want you." This may be true in some cases, but the vast majority of events get way more submissions than they can possibly accept.

"Not Selected" implies that other choices were made in preference. This may mean, "We really like you, but we don't have space for everyone."

A Speaker Problem, Not an Event Problem
The terminology of "accepted" and "rejected" is not coming from the events themselves. I think that events go out of their way to avoid the term "rejected". Here's an example from a recent event notification that I received (and I've got lots of examples):


"We regret to inform you at this time that your papers were not selected."

This is pretty common, but we as speakers tend to translate this into "rejected".

Change Your Words, Change Your Thoughts
As I mentioned in the previous article, it's really easy to take rejection personally even though it isn't personal. But by changing how we refer to things, we can change how we think about things.

I'll be the first to stop using the word "rejected". I will now say that I wasn't selected. I know that I'm good at what I do. I know that my talks are useful. But I also know that there are other speakers and topics that are better fits for a particular event than I am.

Huge, Awesome Update
This topic had been on my mind for a while. A couple of events that I have submitted to use PaperCall.io to collect submissions and handle selection. I noticed that the site used the term "rejected", so I tweeted about it.

To my huge surprise, PaperCall.io responded within just a few minutes of the tweet: 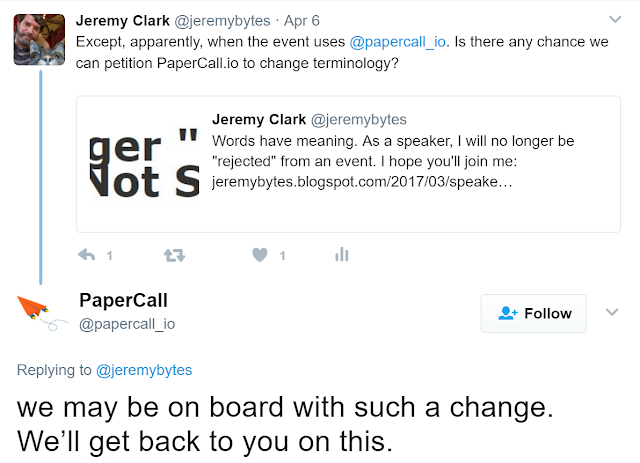 Then 2 hours later, they implemented the changes (tweet link): 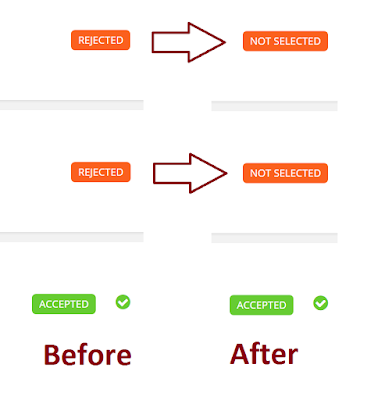 A big thanks to PaperCall.io on getting on board with this idea and jumping on it so quickly. This is really amazing.