Comment Selection
They shortcut to comment out a block of code is "Ctrl+K, C" or "Ctrl+E, C" (as a reminder, I'm using the default C# settings in Visual Studio).

To comment out a selection, we first highlight the code:

That's it. Just another one of the many keyboard shortcuts available.

Alternate Methods
If you can't remember the shortcut, you can always use the "Edit" menu. Just go to "Edit -> Advanced": 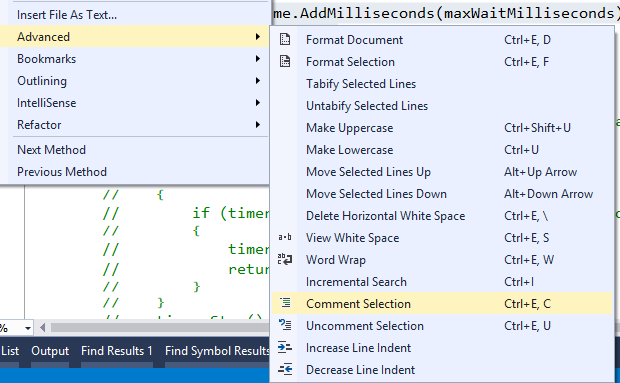 And by default, there is also a button on the toolbar:

Uncomment Selection
Reversing the process is just as easy: "Ctrl+K, U" or "Ctrl+E, U". Just highlight the block of commented code:

And press "Ctrl+K, U" to uncomment the selection:

One thing to watch out for is when using the delimited-comment notation ( /*  */ ) in our code. If the delimited comments span multiple lines, then we want to make sure to include the entire delimited comment in the selection. Otherwise, we'll end up commenting out an opening or closing tag, and we'll be left with an unbalanced comment.

Ctrl+K or Ctrl+E?
You may have noticed that in this and the previous article about Format Document, we have the option of using "Ctrl+K" or "Ctrl+E" to start off the command. Which one should we use?

That's a question I can't quite answer. Currently, both keybindings work (again with the default C# settings). I'm used to using "Ctrl+K" to start off the shortcuts (whether formatting documents or commenting/uncommenting), so that's my current habit. In addition "Ctrl+K" starts off "insert snippet" or "Surround With", so that's less for me to try to remember.

You'll notice that the menu items in Visual Studio all have "Ctrl+E". This might lead you to believe that Ctrl+K is the old way of doing things and we should use Ctrl+E.

So at least for the time being, I'll continue to use "Ctrl+K". But either one will work.

Wrap Up
Keyboard shortcuts can make us more efficient as we're typing in code, editing, or debugging. If we find ourselves using a feature frequently, instead of reaching for the menu or tool bar, we should practice using the keyboard shortcuts.

With just a few of these in our toolbox, we can get our work done more quickly.