Looking for Answers: Origin of the Homicidal Developer

In my presentation "Clean Code: Homicidal Maniacs Read Code, Too!" (video & downloads), the homicidal maniac developer plays a key role (and leads to the best joke in the presentation): 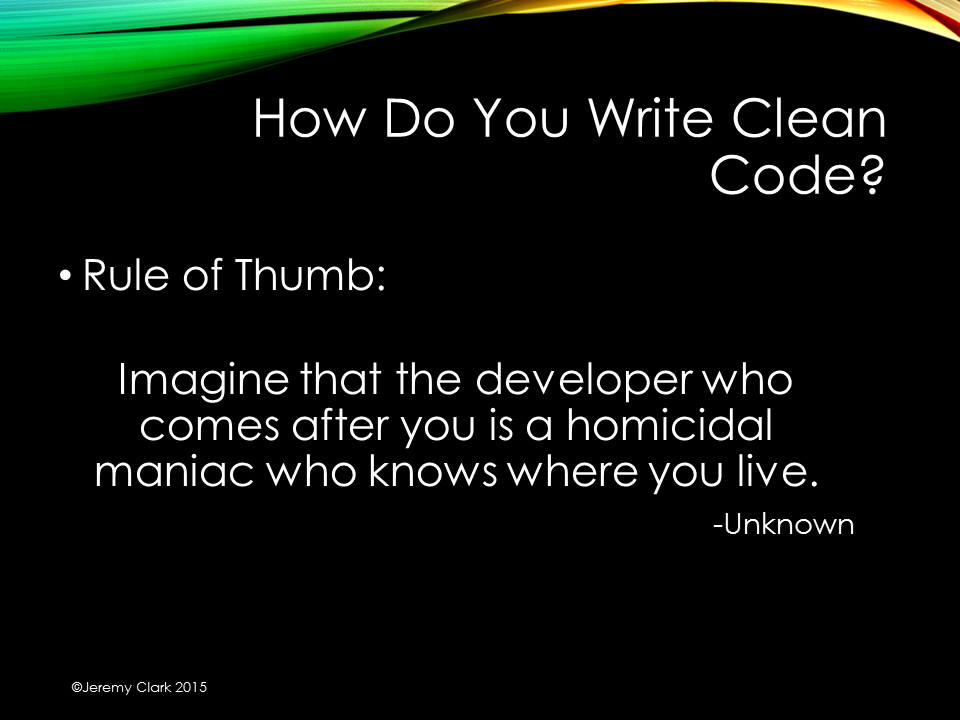 I have this rule marked as "Unknown" because I'm not sure where it originated. I first heard the concept on a podcast a while back (sorry, I don't remember which one). I've been hoping to track down the originator of this because I would love to give him/her credit for it.

The Joy of the Internet
Shortly after I published my video last week, I saw my name come up in a Twitter thread that started here (just click on the photo to see the full thread):

Cesar took motivation from my Clean Code talk to include in his presentation on Agile Testing. This kicked off a discussion among Cesar and some other folks in Brazil about the origin of this concept (and thanks to Google Translate, I was able to follow the conversation -- the internet is pretty awesome).

Origins
That brings up the question of where this phrase originated. There's even a question that was posted on StackOverflow regarding this: Who wrote this programming saying?

Unfortunately, this was closed as being "not constructive". But through various sources (including my new friends in Brazil), I've found a couple of usages.


Always code as if the guy who ends up maintaining your code will be a violent psychopath who knows where you live.

He does not give an attribution here (unfortunately). You can find this quote with a Google Books search.


Always code as if the guy who ends up maintaining your code will be a violent psychopath who knows where you live.  Code for readability.

Variations
Another variation that I've seen (without attribution) is this one:


Always write code as though it will be maintained by a homicidal, axe-wielding maniac who knows where you live.

And, of course, there is the mutation that I use in my presentation:


Imagine the developer who comes after you is a homicidal maniac who knows where you live.

So there's lots of stuff out there that points to this concept.

A little bit of digging says this is from an unattributed sig that Martin Golding used in 1994. So similar to John Woods' sig above but a few years later.

Update 10/27/2015
Another attribution to Martin Golding. Can anyone confirm this? Martin?

OK Internet, Now It's Your Turn
I would love to give proper attribution to the concept of the axe-wielding, homicidal, violent, psychopath, maniac developer.

In the meantime, write code to keep the homicidal maniac happy.