Where Do Curly Braces Belong?

A question came up in one of my sessions this past weekend (Clean Code: Homicidal Maniacs Read Code, Too):

Do you put opening curly braces on the same line or a separate line?

(Let the religious war begin...)  So, I gave the answer, "It usually doesn't matter as long as you are consistent."  There is an exception for one particular language (which I'll mention below).

Option one is to put the curly braces on the same line.  Here's a sample:

Option two is to put the curly braces on a separate line.  Here's a sample: 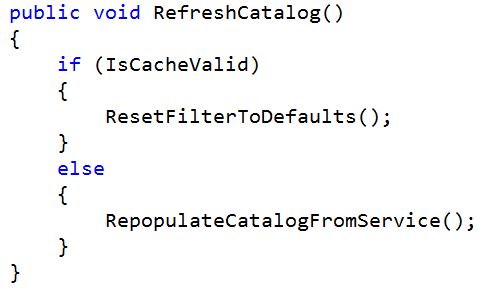 Each of these styles has its pros and cons.  So, let's take a look at the advantages, and I'll let you know my personal preference.

Camp One: Opening Curly Braces on the Same Line
The biggest advantage to having the opening curly brace on the same line is to save vertical space.  Vertical density is an important topic when talking about easy-to-read code, so this is definitely something that we should consider.

By having the curly brace on the same line, we reduce the (already short) code sample above by 3 lines.  This means that we have more space on the screen to see additional code.

This is also welcome in books and blogs that include code samples since more code can fit in less vertical space.

Camp Two: Opening Curly Braces on a Separate Line
The biggest advantage to having the opening curly brace on a separate line is that the curly braces will always line up visually (assuming that we are also using good horizontal spacing in our code).  This makes it easy to visually spot the beginning of the code block -- we just need to find the end brace and then scan up until we see an opening brace in the same column.

Camp Three: K&R
Now, there is a third camp that I should mention just because you may run across it.  This is the K&R method (from the book The C Programming Language by Brian W. Kernighan and Dennis M. Ritchie - Amazon link).  I recently ran across a curly brace discussion, and they decided that no matter what, K&R is wrong.

I'll have to admit that I didn't know what the K&R method was.  When I'm reading books, I generally don't pay attention to curly brace layout.  As mentioned above, books often use the "same line" version to save space.  So, I went back and took a look through my K&R and was a bit surprised at what I saw.

Here's a sample (based on the same code block from above):

I think that we can all agree that consistency should be high up on the list So, we'll take K&R off the list of possible choices.

Pick One & Be Consistent
Ultimately, which style we choose doesn't really matter.  What's important is that we pick one and stay consistent.

As with everything else in the development world, we need to find the balance.  That's why I don't spend time in my session to talk about this particular topic.  People on both sides are extremely passionate about how they do it "the one true way".  But really, there are more important things that we should be discussing.

One Exception: JavaScript
There is one exception to the "it doesn't matter" rule: JavaScript.  JavaScript has a quirk in the language called semicolon insertion.  This means that if the JavaScript parser thinks that you forgot to put a semicolon at the end of a line, it will put one in for you.  This can cause problems.

For more information on this, just do some searches for "JavaScript semicolon insertion", and you'll find tons of results.  This is also mentioned in JavaScript: The Good Parts by Douglas Crockford (Amazon Link + Jeremy's Review).  Of course, he puts this into a section called "The Awful Parts."

So, for JavaScript, we should put our opening curly braces on the same line.  Otherwise, we may get unexpected behavior from our code.

Update 2020: Another Exception: Go
Go uses a C-style syntax with braces for blocks. The language enforces style #1: opening brace on the same line. It also enforces that braces are required for "if" blocks and similar structures, even if there is only one line inside the block.

Personal Choice
Okay, so you've read through all of this, and I still haven't told you my preference.  I like to have the curly braces on a separate line.  There are 2 reasons for this.

First, I like that the curly braces line up.  This helps me see where the blocks are.  (The same was true when I programmed Delphi (Object Pascal) -- I like to have "Begin" and "End" statements line up.)

Second, I'm a lazy programmer.  I constantly let Visual Studio reformat my code for me (Ctrl+K, Ctrl+R).  The defaults for Visual Studio are to put the opening curly brace on a separate line (unless both curly braces are on the same line -- but that's an entirely different discussion).  As a side note, if you get the "Productivity Power Tools" for VS2012, there is an option to have it reformat your code automatically when you save a file; I don't have this turned on.

You can change the way that Visual Studio formats your code; there's a whole slew of options available.  This is why I put this into the "lazy programmer" category.  For the most part, I run with the Visual Studio defaults (unless there is something that really bugs me).  I have a history of moving around to a variety of machines, so I usually have as little customization as possible so that they will all behave the same.  (I know, there are ways to export profile settings now, but I'm still stuck in my old ways.)

Wrap Up
I always find it interesting to have these types of discussions with other developers.  I like to see who takes it seriously and who sees it as an arbitrary choice.  There's also plenty of other people in between.

Pick your battles.  In a team environment, we need to make sure that we all work in a consistent manner.  Ultimately, where the curly braces go is pretty unimportant compared to other things -- like unit testing strategies.

So, keep your curly braces consistent.  And make sure you're using "the one true way." <smirk/>